For the most part, cigars look a lot alike. Sure, there are certain cigar oddities –– such as excessively long cigars or cigars that come in bizarre shapes. But, generally speaking, a majority of cigars share a similar size, shape, and color. If you were to walk into a cigar shop, pick a cigar at random and remove the band, it would be incredibly difficult for anyone –– even an experienced cigar smoker –– to identify the stick with any degree of accuracy. Thankfully, eye-catching bands and boxes help smokers differentiate the hundreds of varieties of cigars available on the market at any given time.

Strictly speaking, the branding associated with a cigar –– its band and the box it comes in –– shouldn’t have any bearing on the smoking experience. Yet, cigar lovers often prefer a particular brand and develop an attachment to the look and feel of certain cigar bands and boxes. And, of course, cigar bands and boxes are crafted to inform and delight connoisseurs.

Cigar bands have a long and storied history, and no one is quite sure where it begins. Some tales hold that the Czarina of Russia, Catherine the Great, ordered silk bands to be placed on cigars to prevent them from staining her fingers. A similar fable involves bands coming into vogue to prevent tobacco stains from ruining the white gloves English gentlemen wore in the middle of the 19th century. The most accepted origin story for cigar bands, though, states that cigar maker Gustave Bock created simple bands with his signature on them to mark sticks intended for export to Europe. Regardless, since roughly the 1830s onward, cigar bands have been a fixture in the industry. 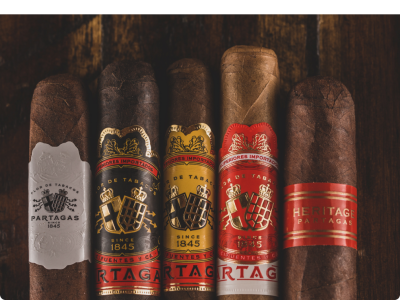 Today, cigar bands are incredibly diverse and elaborate. Cigar bands can provide the smoker with information about the brand behind the cigar, the cigar maker who blended it, the cigar’s country of origin, the style of the cigar, the shape, and even the year of the vintage. Some cigar bands aren’t even made of paper. Some are created from tobacco leaves and are intended to be smoked with the rest of the cigar. Others are crafted from metal and look more like a ring than a common cigar band.

Traditionally, cigar boxes are made from cedar wood. Cedar is a classic substance for storing cigars –– in large part because it holds humidity well. (It also has the added benefit of looking great too.) Of course, not all cigars come in old-school cedar boxes. Some come in tins, tubes, cans, and in the case of Punch Egg Roll –– faux Chinese takeout boxes. Note here that cigar boxes themselves are often NOT a suitable place to store a cigar for a long period of time outside of a properly humidified setting.

By modern standards, cigars are time-intensive products. It can take years for master blenders to transform tobacco seeds into premium cigars. Indeed, multiple stages of the cultivation process require serious patience. It takes months to grow the seedlings, months to harvest the plant, months to cure the tobacco leaves, and months to ferment them. And after all that, cigars need at least one month to simply “rest” before they’re shipped to retailers.

However, aging is a critical component of cigar production. You can’t “rush” tobacco development, and certain cigars – like Maduros – simply require lots of time to achieve their desired color, texture, and flavor.

Storing cigars correctly will preserve them for years to come. Find out what you need to know about this best practice here.

This month on Cigar World you could win a Macanudo Cigar Travel Case.