By modern standards, cigars are time-intensive products. It can take years for master blenders to transform tobacco seeds into premium cigars. Indeed, multiple stages of the cultivation process require serious patience. It takes months to grow the seedlings, months to harvest the plant, months to cure the tobacco leaves, and months to ferment them. And after all that, cigars need at least one month to simply “rest” before they’re shipped to retailers.

However, aging is a critical component of cigar production. You can’t “rush” tobacco development, and certain cigars – like Maduros – simply require lots of time to achieve their desired color, texture, and flavor.

Exactly when a cigar is “finished” aging is a matter of opinion. Because cigars are natural products (you can think of them as a collection of tobacco leaves), they change over time. True, some of the chemical reactions that occur during tobacco development happen as a result of outside forces. Fermentation, for instance, isn’t just a matter of time, but rather of force, heat, and moisture applied as well. Still, just letting a cigar “rest” can change the character of the smoke. 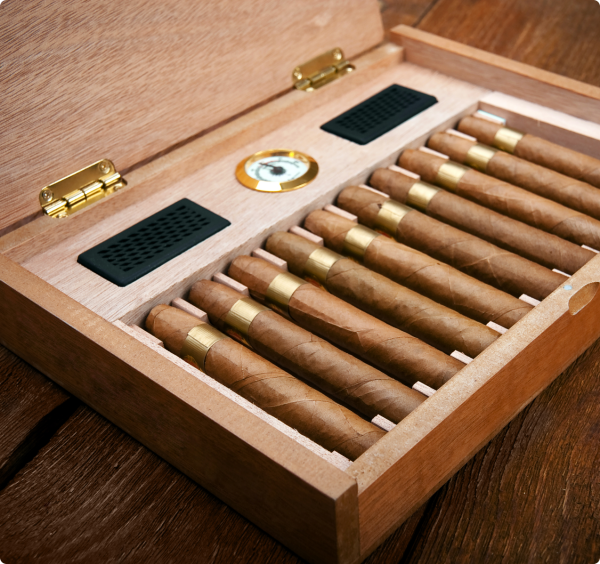 While the phrase “fresh-rolled cigar” may have an appealing ring to it, the truth is that it’s not recommended to smoke a cigar immediately after it’s produced. That’s because, with time, tobacco leaves continue to release chemicals like ammonia even after they’re rolled. Cigars that haven’t been aged properly may have a harshness or “bite” to them because the tobacco hasn’t had a chance to properly mellow. What’s more, flavor profiles can and do change as cigars are aged. Flavors from different leaves may meld together in pleasing and potentially even unexpected ways if left to age long enough.

It’s generally accepted that a cigar is ready to smoke a month or so after it is rolled. However, cigar connoisseurs may choose to age their cigars for further months or years to develop the flavors even more. If properly stored, cigars may age with positive effect for another 5-10 years after production.

Where Cigars are Aged

All cigars are aged for certain periods during production. What can make a specific cigar unique is the manner in which it is aged. One interesting method for aging tobacco is to utilize alcoholic barrels. For example, barrels used for the production of wine, whiskey, or even beer may be used to house tobacco leaves during the aging process. Diesel Whiskey Row Sherry Cask contains a binder leaf that’s aged in barrels once used by Rabbit Hole whiskey and Pedro Ximinez Sherry.

Alternatively, tobacco leaves may be aged in burlap bales. Or, as in the case of CAO Arcana Firewalker, they may even be buried underground for part of the fermentation process.

Every premium cigar you’ve ever had was rolled by hand. As opposed to cigarettes and machine-wrapped cigars, premium cigars are crafted by hand by trained artisans. The art of rolling a cigar is a time-honored tradition that can take years to master. While we’ll take a quick look at this process here, remember that it is much easier said than done.

Properly rolling a cigar ensures that the flavors complement each other well, that the cigar burns evenly, and that the draw is measured and smooth. You can tell when a cigar has been rolled properly by the quality of the burn, the solid development of the ash, and balance of the draw. Even slight imperfections in the rolling process can compromise the integrity of a cigar, which is why professional cigar rollers are held in such high esteem and train so vigorously to hone their skills.

For the most part, cigars look a lot alike. Sure, there are certain cigar oddities –– such as excessively long cigars or cigars that come in bizarre shapes. But, generally speaking, a majority of cigars share a similar size, shape, and color. If you were to walk into a cigar shop, pick a cigar at random and remove the band, it would be incredibly difficult for anyone –– even an experienced cigar smoker –– to identify the stick with any degree of accuracy.