Rare Corojo has become an annual feature in the Punch lineup. And this year–– to mark its 20th year in production –– Punch is releasing the signature cigar in a special size called Aristocrat. This unique cigar was originally created by the founder of Punch Cigars, Frank Llaneza, at the Villazon Factory in Honduras. The special vitola was described as having a “baseball-bat” look and was fittingly commissioned for two legends in the sports world: Red Auerbach (head coach of the Boston Celtics) and Art Rooney (owner of the Pittsburgh Steelers). 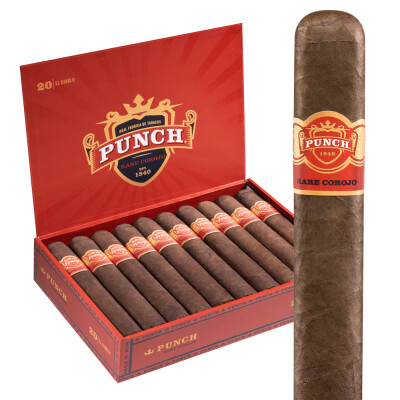 “The ‘Aristocrat’ size was almost a forgotten size. Lucky for us, as we were looking back in the archives of Punch, we learned that this size hadn’t been made in decades. Further digging in the factory turned up 80 molds for this special size which is just what we needed for a limited edition smoke. This is our way of giving a nod to Punch Rare

Corojo’s 20 year reign as the original seasonal cigar and paying tribute to the roots of the brand.”

Punch Rare Corojo is best known for its lustrous Ecuadorian Sumatra wrapper. These special tobacco leaves are only grown in a limited quantity, and they possess both a unique reddish hue and a distinctively smooth taste. Rare Corojo possesses a Connecticut Broadleaf binder, and includes filler tobaccos from Nicaragua, Honduras, and the Dominican Republic. Tasting notes include spice, chocolate, wood, and earth. In addition to the Aristocrat size, Rare Corojo will also be available in nine other frontmarks.

The Aristocrat version of the Punch Rare Corojo is slated for a limited release. It will come in boxes of 20, and has an SRP of $9.99 per cigar.

Punch is one of the first cigar brands to have been developed in Honduras. The company has an enduring legacy in the industry, and it boasts a number of unique and bold cigars in its lineup. For more information about Punch and all of your favorite brands, sign up for Cigar World today.