The character of a cigar is determined by two types of factors: natural influences and man-made ones. Natural factors that affect tobacco development include elements like the weather, the composition of the soil, and the very nature of the tobacco plant itself. There’s not much a blender can do about the climate in Ecuador or the soil in Nicaragua.

However, other influences –– like curing and fermentation –– are under direct control of master cigar blenders. This allows for a great range of creativity and exploration. Indeed, the curing and fermentation process is (arguably) the stage in cigar production when the flavors and qualities that come to define an individual cigar start to take shape.

Let’s dispel a common misconception. Curing tobacco is not the same as merely hanging tobacco leaves out to dry. The only time tobacco leaves are dried –– as opposed to being cured –– is for the creation of the infamously green-colored Candela tobacco style. (The Edge Candela by Rocky Patel is a good example of a cigar that prominently features Candela tobacco.)

Curing is instead a series of complex chemical changes that convert big, raw, and green tobacco leaves into the much more recognizable brown tobacco leaves you’d normally associate with a cigar. During the curing process, tobacco leaves are (often) stored in large dark barns where heat is applied to facilitate the chemical reactions necessary to create quality cigar tobacco. Curing takes around 6 weeks to complete, and tobacco leaves lose most of their “green weight” over this period. However, it really is the first 48-72 hours that make or break tobacco curing. If you’ve ever tried a cigar that had a raw or unintentionally bitter taste, it’s likely because something went wrong during this crucial time frame. One final note: the longer tobacco leaves are cured, the darker they become. 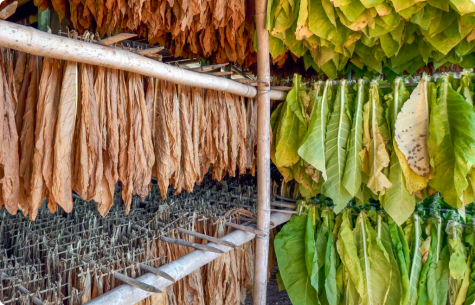 Cigars are sometimes compared to fine wines or craft beers, and there’s something to be said for the comparison –– since all three undergo their own form of fermentation. Tobacco fermentation involves the application of water, heat, and pressure to fully develop the aroma, taste, and color of cigar tobacco. It’s during this stage that tobacco loses significant amounts of ammonia, nicotine, and sugar. As is the case with nearly every aspect of tobacco production, Maduros take longer to ferment than other cigars. 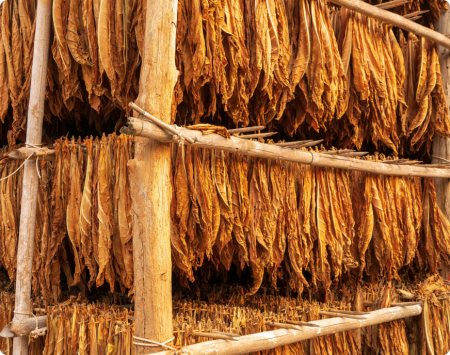 Fermentation may last anywhere from six months to a full year. What’s more, some cigar tobaccos undergo multiple fermentation cycles. One of the more interesting variations on cigar fermentation occurs deep in the Amazon rainforest. There, tobacco leaves are packed into a special carrot-shaped cylinder called an andullo (or carrote) to ferment. This specially-fermented tobacco is used in CAO Amazon Basin.

Like so many aspects of cigar production, harvesting is a labor-intensive process done primarily by hand. Depending on the type of tobacco grown, 2-full time workers may be required for harvesting purposes –– per acre. Because of the diverse nature of tobacco (and cigars), though, the act of harvesting can occur at different times and in different ways.

Ultimately, how a tobacco plant is harvested is determined by various factors that all influence the quality and performance of the final product –– the cigar. But let’s not get ahead of ourselves. First, we need to take a look at something else entirely: the sun.

Unlike other massive manufacturing undertakings, which are often completely automated (or nearly so), the majority of the work done to create a cigar is carried out by human beings with their hands. A big reason why noticeable errors don’t occur more regularly during cigar production is the sorting and grading process.

This month on Cigar World you could win a Macanudo Cigar Travel Case.