Cigar boxes are works of art. They are often adorned with eye-catching paintings, iconic logos, and bold, bright colors. They can be made from a wide range of materials, and they come in all shapes and sizes. And they can be made into guitars too!

In the middle of the nineteenth century, portable cigar boxes containing 20-50 cigars gained widespread popularity among smokers. It wasn’t long after the rise of the traditional cigar box as we know it that cigar box guitars were invented. Indeed, illustrations suggest that soldiers in the American Civil War fashioned old cigar boxes into instruments like fiddles. From there, cigar boxes were used to create banjos and, eventually, guitars. The unique accessibility and sound of the cigar box guitar even influenced the development of blues music.

One of the most accomplished creators of modern cigar box guitars is Jonathan Greiner of Lucky Box Guitars. Jon was first inspired to create cigar box guitars by his grandfather –– who was an artisan himself. He spends hours creating each cigar box guitar and scours thrift stores and garage sales to find materials he can use to form unique instruments. Jon has been active for years and is still building incredible cigar box guitars.

While on a recent adventure in Nashville, Cigar World had the opportunity to sit down with Jon. He has been making cigar box guitars for over a decade and has been featured in Nashville Arts Magazine, on PBS’ show Tennessee Crossroads, and on display at the Bridgestone Arena just to name a few. Jonathan was born and raised in Tennessee.

Jon stumbled upon this craft after moving back to Tennessee from Washington D.C., where he had been working as a custom cabinet maker. After moving back to Gallatin, a conservative part of Tennessee, he was struggling to find a job in tattoos and piercings. He didn’t have a working car, so he was limited as to what he could do. He was also looking for a way to express himself, and he was always fond of music, the creation of music and instruments.

Jon looked up handmade instruments, and cigar box guitars came up in his search. Then started the deep dive into this craft, and he discovered that he loved the history behind it, the ability to showcase style and the low cost associated with the creation of this instrument. His first cigar box guitar was made with $6 worth of materials from Home Depot, a butter knife, screwdriver, and vise grips. Jon said that it was not pretty, but he was amazed because he could play music on it. This started Jon’s path in the cigar box guitar artisanal space. 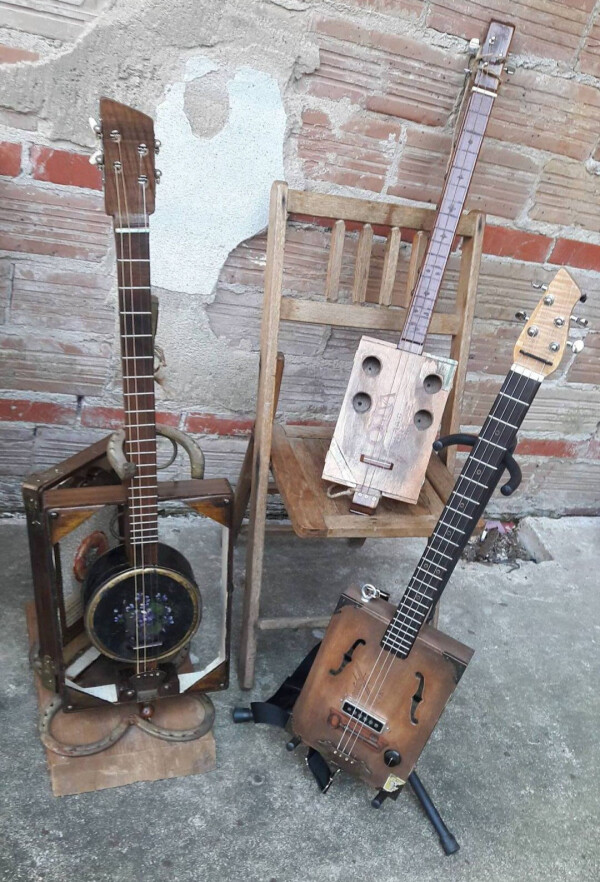 Being that Jon was out of work and had created this musical instrument, he started to play outside of a friend’s gas station for tips and food. Then he started to sell his guitars in the store. He eventually was able to save up enough money to get his car fixed and headed into Nashville to make music alongside the other buskers and tramp artists. During this time, he was turning heads in the cigar box guitar space. He was asked to attend the first ever cigar box guitar festival in Clarksdale, Mississippi. They wanted to showcase some of his work in their museum.

It can take as little as a couple of hours up to weeks to make a cigar box guitar. He usually gets his cigar boxes from local tobacco shops where the owners might set aside a special edition box for him. Jon frequents shops that donate the proceeds of the boxes to different local charities.

Every Lucky Box Guitar has its own one-of-a-kind story, and –– this month only –– you can win one! Just give us a follow on Instagram, follow @Luckyboxguitars, and tag a friend, and you’ll be entered to win. Two winners will be selected. Hurry –– this promo ends on 12/31/22.